← more from
RareNoise Records
Get fresh music recommendations delivered to your inbox every Friday.
We've updated our Terms of Use. You can review the changes here. 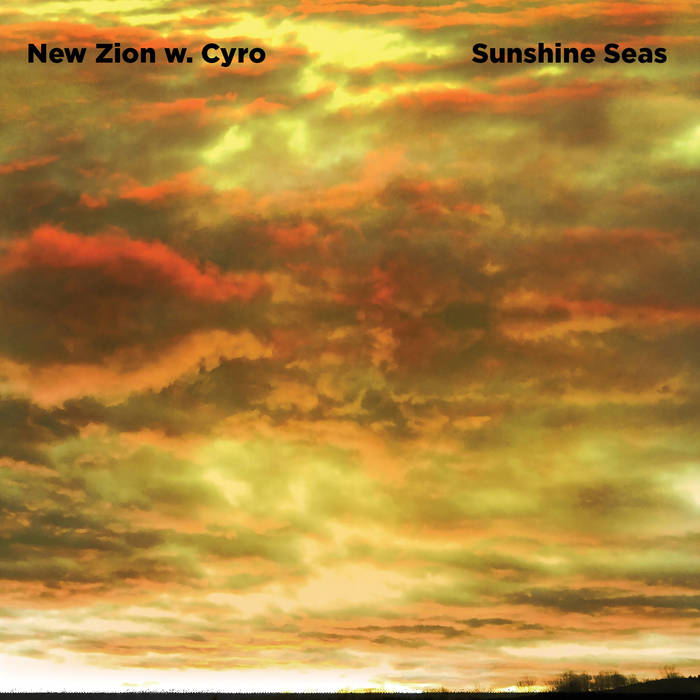 With Sunshine Seas, the New Zion Trio’s latest project (and RareNoise debut), Saft further builds on the success of New Zion's first two releases “Fight Against Babylon” and “CHALIWA” (Veal Records). Saft not only supplies all the piano and an assortment of vintage keyboards and synths, he also plays all the electric bass and guitar parts on this heavy Dub influenced recording. Brazilian percussionist Cyro Baptista, a longtime colleague of Saft’s, adds his signature percussive flavors and ebullient presence on such mesmerizing dub groove tracks as the opening “BrazilJah” and the beguiling “Chalice Pipe”, which has Baptista on vocals and cuica and Saft comping in a gentle bossa nova vein on acoustic guitar. The darkly insinuating “Onda” features Baptista’s massive ceramic drum work and has him singing in Portuguese about waves on the beach in a flow metaphor which deftly captures the feeling of this evocative track. The heavy dub track “Ranking” is a prime showcase for Cyro’s mastery of the jaw harp (or Jew’s harp).

“I've been extremely fortunate to know and work with Cyro Baptista for well over 20 years,” says Saft. “We've played on countless John Zorn sessions and performed together all over the world. We are both core members of Zorn's bands Electric Masada and The Dreamers. I was fortunate to produce two of Cyro's fantastic albums, Beat The Donkey and Love the Donkey. He and I have toured together for decades and I consider him a close friend. I'm honored to work with and learn from a master like Cyro. As a musician, he brings a breadth of knowledge of not just Brazilian music but musics of the world. Cyro is also a brilliant improviser at the highest level. He brings a beautiful feeling of true positivity and light, qualities which are crucial to New Zion. He not only broadens our musical palate, he lifts us up to higher heights with his shining brilliance. A perfect addition to the New Zion sound.”

Saft’s wife Vanessa adds alluring vocals on the lovely title track Sunshine Seas. “Vanessa really captured the breezy, sunny tone and feeling of this tune with her lyrics and sound,” says Saft. “I am thrilled to have her join us for this. In the past she has also contributed vocals to albums by John Zorn and Cyro Baptista, including a feature on ‘Ama’ from Beat the Donkey. Additionally, she has contributed consistently deep and insightful lyrics to many of my albums, including Breadcrumb Sins and Black Shabbis (both on Zorn’s Tzadik label).”

Brad Jones anchors three tracks -- “Chalice Pipe,” “Sunshine Seas” and “Lamb's Bread” -- with deep upright bass grooves. And drummer Craig Santiago supplies the all-important one-drop, Rockers, and Steppers grooves to fuel this potent session. Saft credits co-producer Christian Castagno with realizing the deep Dub mixes throughout Sunshine Seas. “Chris and I produced and made records together in the 1990s under the name Ohm Boy & Key Command (Chris being Ohm Boy and I being Key Command). Chris moved to the jungle in Colombia a number of years ago and this album sees our triumphant return to co-production. Chris was instrumental in teaching me dub and electronic music engineering techniques in the recording studio over so many marathon all-night sessions in the 90s in Brooklyn. Together we workshopped all manner of forward-thinking progressive styles of Reggae, Dub, hip-hop, electronic music, microtonal dance music and beyond. We developed a unique style of feeding off one and other's musical energies that propelled us to completing scores of records on the highest level. For this recording I prepared the tracks with all necessary musical elements and Chris deftly knocked the dubs right out the box.”

Saft explains that his affinity for Jamaican music took hold decades ago. “Reggae and dub music have been an essential part of my musical direction since I was a youth. Growing up in the New York City area, we listened to Bob Marley, Peter Tosh, Stevie Wonder and Bunny Wailer. I later became obsessed with King Tubby’s sound and his disciple Scientist. These were producers who used the recording studio and mixing console as a musical instrument. The greatest dub producers and artists shape the sound of their work by using the audio gear as musical devices to shape the tone. Delays, reverbs, modulation devices, compression and saturation devices: these are all tools in the toolbox of the greatest dub artists. Additionally, I feel extremely fortunate to have worked with many true masters of Reggae music, including the living legends Bad Brains. Having the opportunity to learn with true masters like Darryl Jenifer and Dr. Know of Bad Brains has deeply informed how I think about and shape music every single day.”

He adds that his interest in Jamaican music has informer his spiritual path. “Rastafari and the mystical paths of Reggae music are deeply connected with Kabbalah and the trance-like states of Jewish Mysticism. I also deeply believe that the greatest improvised music traverses those same mystical realms. I have always sought the spiritual through music. Reggae and dub look to the very same transcendent meditative states. I've put together New Zion as a vehicle through which we can all access these higher states of consciousness through the power of music. Reggae music and Dub are crucial to this path for me.”

Recorded at Saft’s Catskills studio Potterville International Sound, Sunshine Seas stands as a crowning achievement in the career of this multi-faceted musician-composer-producer.

Executive Producer for RareNoise: Giacomo Bruzzo
All Photos and Images by Jamie Saft c. 2015
Art and Design by Graham Schreiner

Bandcamp Daily  your guide to the world of Bandcamp

The Hammer and The Relentless from the Boston band Malleus stop by for a chat.